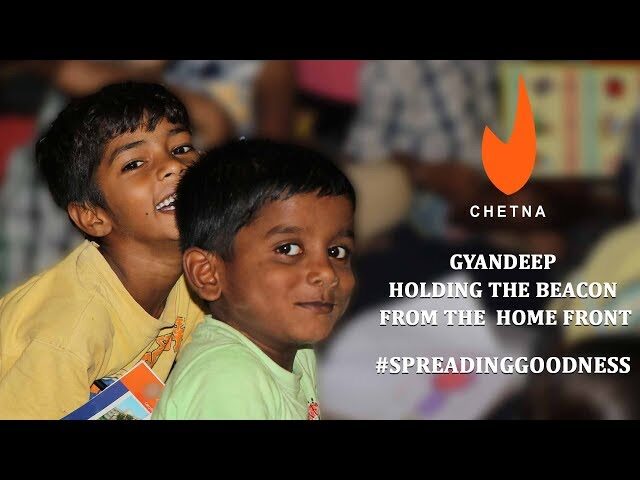 And miles to go …

Do I get tired after a day’s grueling household work? Am I looking forward to retirement and a carefree afternoon slumber? But can I rest when all I can see around me are many opportunities to make a difference? These three ladies from Mahagun Phase I society, Indirapuram, decided to make it count. While being a rock for their families, they decided to use every available moment in their day to care for those that made their daily machinery run, those that were vital to their day-to-day functioning. They were troubled by the illiteracy or general lack of information and scarcity of means of their support staff and decided to change that.

Mrs. Neelam Khuller, Mrs. Suman Saxena and Mrs. Jaya Verma found that they were like minded and brought their thoughts to fruition by utilizing their housing society’s religious place (‘Mandir’) to educate the children of their support staff; guards, housemaids, plumbers, gardeners and others, and Gyandeep was formed. The students at this in-house education facility have visibly improved in their academic performance but the focus is not limited to tuitions, there is more of an emphasis on the moral and holistic development of the children.

In today’s fast-paced world while the focus on ruthless competition is instilled, unfortunately, increasingly early these days, someone needed to spend time with them to listen to them and introduce them to a world they could redeem by bringing to the table ‘integrity’. Mrs. Neelam Khuller, with delight that one takes in one’s child, beams when she says, ‘they touch my feet and run to greet me whenever they see me’.

The most important objective of the teachers is to ensure there are no dropouts from school, they have also been absolutely adamant on admitting to school ones who have not yet enrolled and also sponsor the exceptional performers. The children are clearly motivated and it’s only a little surprise that some of the parents themselves have enrolled for learning because it’s never too late to learn and they hope to match their steps with the world.

Mrs. Suman Saxena has been involved in philanthropic work all through her life and it was a natural progression for her to spearhead the task in her own neighbourhood. The trio devotes 2-3 hours daily and focuses on the three main subjects; English, Hindi and Maths. These three ladies are joined from time to time by other residents of the society as per their availability.

I shall rest in the eye of the storm

Mrs. Neelam Khuller, had run a school for 20 years at Durgapur and didn’t want an easy life on moving to Indirapuram post her husband’s retirement, she wanted to do something more meaningful and with her training and experience. You have to see how she enlivens the class with her energetic hybrid techniques of visual, auditory and kinesthetic teaching. Her passion speaks for itself as she relates her experience with a mute child who showed his enthusiasm in making an attempt to communicate with them and the teachers made an equal attempt to match his attempts despite their lack of professional training in children with special needs.

Mrs. Jaya shares that they have never been short of funds, the credit goes to housing members’ council that encourages these activities and contributes whole heartedly to all such initiatives. The president of the society, Mr. M C Saxena, shared how the residents never have to be asked to step forward to embrace their own and accept it as their social and moral responsibility. This ideal society is an example to all others and if the model were copied it would produce many self-sustainable units. It is a responsibility that not many of us recognise; nevertheless, it is of primary importance because it’s nothing but compassion, something that we need to imbibe as not our second but first nature.